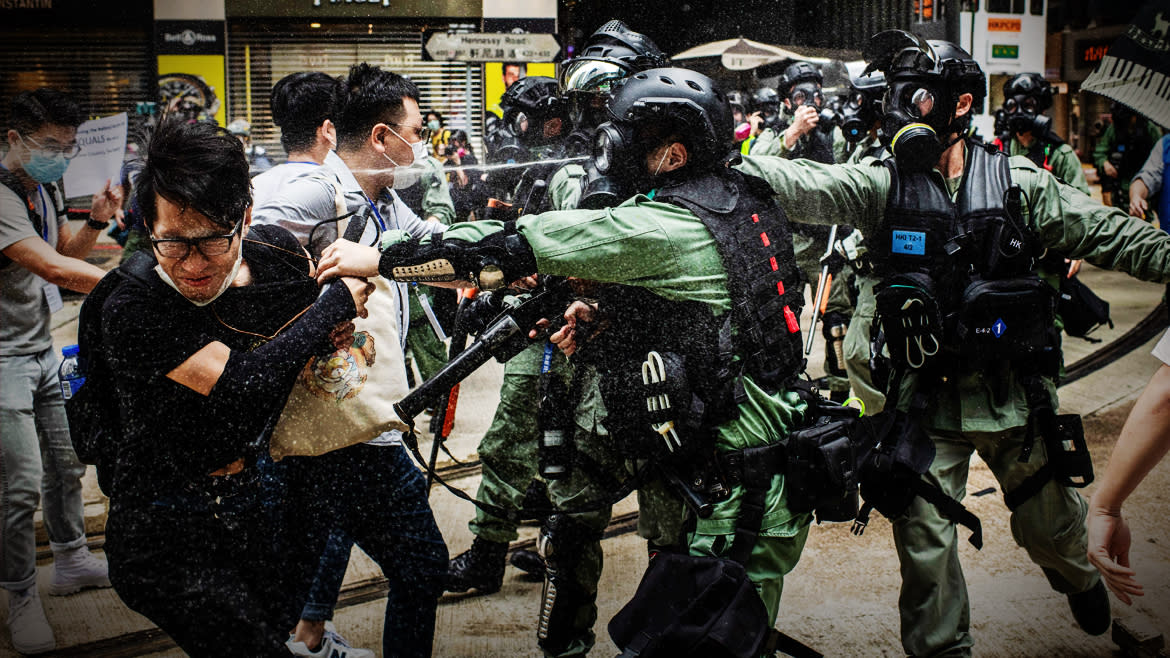 Critics of the new law say it’s a violation of the “one country, two systems” agreement that has granted Hong Kong certain levels of autonomy — like its own police force and judicial system — since the island became part of China in 1997 after more than a century of British rule.

The specifics of the law are unclear, but experts suggest it could give Chinese leader Xi Jinping broad authority to stamp out pro-democracy protests by arresting activists and banning speech critical of the regime. Similar laws have been pursued by pro-Beijing members of Hong Kong’s legislature several times in recent years, but none were passed. Last year, a bill that would have allowed prisoners from Hong Kong to be extradited to the mainland sparked a massive and violent wave of protests that threw the city into chaos for months.

China’s move to bypass Hong Kong’s lawmakers and assert new authority over its citizens represents “a death knell” for the island’s autonomy, U.S. Secretary of State Mike Pompeo said. Leaders from the U.S., the United Kingdom, Australia and Canada released a joint statement condemning the law, which they said would “curtail the Hong Kong people’s liberties.”

American lawmakers from both sides of the aisle have called for a significant response to curb China’s efforts to impose new restrictions in Hong Kong. Many have called for China to face economic consequences, including tariffs, sanctions or changes to trade policy. On Wednesday, Pompeo declared that Hong Kong was “no longer autonomous from China,” which could open the door for revoking the island’s special trade status that gives it certain freedoms not enjoyed on the mainland. President Trump announced on Friday that he was instructing his administration to begin the process of eliminating those exemptions and consider sanctions on Chinese officials.

Others argue that China’s action warrants a response from the international community to prevent what they see as China’s increasingly aggressive authoritarian behavior. If Beijing is able to impose its will on Hong Kong without consequences, the government may feel emboldened to pursue similar actions with Taiwan, some experts fear.

There are doubts, however, that any condemnation or economic punishment can do much to temper China’s behavior. Years of combative posturing between Beijing and the Trump administration — over trade, territory in the South China Sea and most recently the coronavirus — may have increased China’s tolerance for international disapproval, some experts say.

Sanctions or tariffs may ultimately do more harm to the people of Hong Kong than to Beijing’s bottom line, economists argue. An aggressive move by Western nations may even backfire by providing evidence for Xi’s arguments against foreign interference in China’s affairs. Some American businesses with offices in Hong Kong have warned that too strong a reaction could jeopardize Hong Kong’s important role as a key hub for the global economy.

Any changes to U.S. economic policy would likely have to come through an executive order from Trump or an act by Congress. It’s possible American lawmakers may wait to see whether China actually exercises its new powers before any response is made. The new law will reportedly go into effect in September.

“If the United States wants to help the people of Hong Kong, it needs to think beyond sanctions and consider the role it has played time and again for victims of political repression abroad — open America’s borders and offer a place of refuge, freedom, and prosperity.” — Matthew Yglesias, Vox

“That is a powerful weapon, but the scope for miscalculation is vast, potentially harming Hong Kongers and driving out global firms and banks. It would be better, as the law also proposes, to impose sanctions on officials who abuse human rights in Hong Kong.” — Economist

“What is now at stake is bigger than the future of Hong Kong, as important as that is. Other nations should ask themselves whether they want China to believe that it can trample on its pledges and renege on international treaties with impunity.” — Editorial, Guardian

“Sanctioning China may serve as punishment for its action, but there’s no realistic chance that the United States is going to force China to change its mind on such a fundamental policy issue. That doesn’t mean it’s a bad idea. But it means that whatever the merits, it’s not an idea that’s going to deliver much help to the people of Hong Kong.” — Matthew Yglesias, Vox

The unspoken assumption is China would not dare hurt its prized conduit to global capital, the goose that lays the golden eggs. With the new Hong Kong national security law, China has called the United States’ bluff.” — Wilfred Chan, The Nation

“If Beijing now appears set on crossing the Rubicon to decimate Hong Kong’s autonomy, it must be made to pay a heavy price for doing so. The people of Hong Kong need strong moral, geopolitical, and material support from the United States and other established democracies.” — Larry Diamond, American Interest

“On the defensive over their handling of the virus, President Trump and his aides have sought to blame China for the pandemic’s toll in the United States. The criticism, by all appearances, has done little to moderate Mr. Xi’s actions. It may even have emboldened them.” — Steven Lee Myers, New York Times

“Unfortunately, Hong Kong is lost. But China must now be made to feel serious consequences for its actions. Otherwise, emboldened by its success, it will attempt to annex the neighboring island of Taiwan. … China’s ruling Communist Party is hell-bent on crushing Taiwan’s successful democracy, fearing it could inspire a pro-democracy movement at home.” — Alexander Görlach, Deutsche Welle

“All options come with costs. If Congress or President Trump do decide to take direct action against the CCP for its efforts to do away with the “one country, two systems” framework, it could prompt China to retaliate and push the global economy in a downward spiral at a time when Covid-19 is already threatening to send the world into a deep recession.” — Samantha Vinograd, CNN

“The assault on Hong Kong requires a robust U.S. reaction — but one that is carefully calculated and not driven by election-year demagoguery.” — Editorial, Washington Post

“What’s being done to Hong Kongers is an immense injustice. But Hong Kong cannot depend on outside intervention for assistance. Beyond some diplomatic pressure from the United States, little else is coming. No major power has the ability or will to protect Hong Kong’s autonomy with military threats.” — Editorial, National Review

“U.S. policy on China is always a balancing act. A slugfest in one area, like Hong Kong, could threaten cooperation in another, like trade. The trick for any foreign policy official or negotiator is trying to compartmentalize and insulate the positive from being swallowed by the negative.” — Daniel DePetris, Washington Examiner