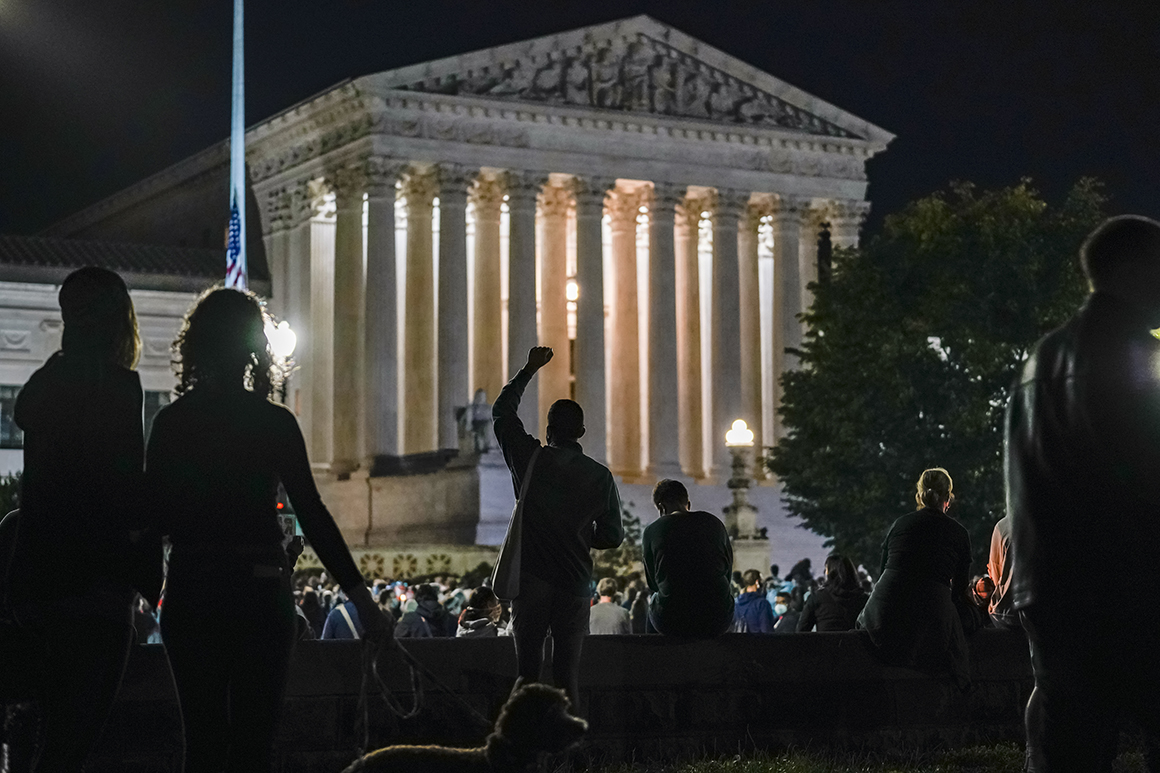 It didn’t take long, after the news of Ruth Bader Ginsburg’s death ricocheted through Washington late Friday, for leaders of some of the most prominent conservative organizations to leap into action — urging donors and grassroots activists overnight to prepare for a Supreme Court battle that could have generational consequences for their movement.

By Saturday morning, senior aides to Senate Majority Leader Mitch McConnell were holding conference calls with conservative stakeholders to discuss how soon they could revive a war-room infrastructure that has laid dormant since Justice Brett Kavanaugh’s grueling confirmation. Others were revisiting their 2020 plans, wondering whether they should scrap the multimillion-dollar messaging campaigns they had planned for this fall — that would have focused on pocketbook issues and the ongoing economic recovery — to flood the airwaves with ads about the sudden Supreme Court vacancy instead.

“Conservatives understand this is a once-in-a-lifetime opportunity to achieve a real conservative majority on the Supreme Court that could last for decades,” said Mike Davis, a former Senate Judiciary Committee aide who founded the Article III Project, a judicial advocacy group, following Kavanaugh’s confirmation. “We are not going to blow it six weeks out from the election.”

But as the initial wave of excitement dissipated over the weekend, some conservative organizers began to express concern about the vetting process that will unfold in the days ahead, as Trump pushes for a swift confirmation process that is neither guaranteed nor likely to draw unanimous support from Senate Republicans.

Almost as soon as Trump’s team focused on Judges Amy Coney Barrett and Barbara Lagoa as his frontrunners for the seat on Saturday, a behind-the-scenes horse race began between anti-abortion purists, who have long sought to overturn the landmark abortion rights decision in Roe v. Wade, and more libertarian conservatives, who are principally concerned with dismantling the administrative state. Several people said Barrett, a devout Catholic and former clerk to the late conservative Justice Antonin Scalia, and who has served on the 7th U.S. Circuit Court of Appeals since 2017, is seen as having more sufficient anti-abortion bona fides than Lagoa, a Cuban American from Florida who was confirmed to the 11th U.S. Circuit Court of Appeals last December.

The jockeying that began over the weekend has involved both social conservative groups — including Concerned Women for America, Heritage Action, Susan B. Anthony List and March for Life Action — and groups such as Americans for Prosperity and the Judicial Crisis Network that have tended to prioritize the judicial philosophies of originalism and textualism over social conservative causes.

Several social conservatives said they are still recovering from a pair of stinging betrayals this summer involving two Republican appointees to the bench, and want stronger commitments to social traditionalism before they can comfortably support the nominee Trump is expected to announce this week. They fear a nominee who does not satisfy these standards could contribute to a generation of disenchanted conservative voters down the road, citing their existing frustrations with Chief Justice John Roberts and Justice Neil Gorsuch.

“This is coming so closely on the heels of Bostock, where we were told Gorsuch was going to be great and we ended up getting completely slapped in the face, that I think the biggest divide will be the extent to which President Trump’s nominee should be scrutinized,” said one conservative policy activist.

“This was not the first term that Roberts gave us reason for concern, plus what happened with Gorsuch — it has people questioning the vetting process,” added Curt Levy, a veteran of Supreme Court confirmation battles and president of the Committee for Justice.

Depending on who Trump chooses, Tom McClusky said his anti-abortion group March for Life Action could wait until it feels the nominee has been properly scrutinized before lending support to the confirmation battle. He noted that they did this with Kavanaugh, who was initially met with reservations from some anti-abortion conservatives.

“The minute the president announces a nominee, we’re not going to send out a news release saying this person is the bee’s knees,” McClusky said. “I certainly hope the president picks a nominee where it’s more clear that they are pro-life. It’s not something that the other side hesitates about, so I don’t see why our side should.”

Privately, religious conservatives expressed concern about Lagoa, a lesser-known judge who wasn’t added to the list of potential Supreme Court nominees from which Trump has vowed to choose until earlier this month. They acknowledge the political upside of nominating a Latina from the all-important battleground state of Florida, where polls between Trump and Democratic presidential nominee Joe Biden have tightened, but remain uneasy about her slim record on hot-button issues such as abortion, health care, LGBTQ rights and Second Amendment protections. While Barrett has previously said it’s “very unlikely” the court will dismantle Roe, her supporters contend she would be a reliable vote against it if given the chance.

“I haven’t heard any concerns about Barrett on abortion. The consensus view is she would be rock solid,” said one Senate GOP aide.

Meanwhile, Lagoa’s supporters argue that in a political climate as fraught as the current one, her bipartisan appeal should carry more weight in White House considerations than outside concerns about her record. Lagoa received an overwhelming 80-15 vote in the Senate for her confirmation last year — compared with Barrett’s 55-43 approval — and could present less risk to vulnerable GOP senators who might otherwise lose critical support if the White House and McConnell plow forward with a nominee whose record and previous comments afford outsize attention to the issue of abortion. In response to a Senate questionnaire she completed prior to being confirmed to the 11th Circuit, Lagoa said she would apply Roe as controlling precedent as a lower court judge.

Others insist that a focus on social issues is more important than ever given the monumental opportunity conservatives have to install a justice who will fill a liberal vacancy and could spend decades on the court. Both Gorsuch and Kavanaugh replaced Republican appointees on the court, unlike the vacancy left by Ginsburg, who was appointed by President Bill Clinton in 1993. One prominent Republican senator, Josh Hawley of Missouri, has previously said he will vote only for a nominee who, prior to being nominated, “explicitly acknowledged that Roe v. Wade was wrongly decided.”

“Cultural and social issues are going to play a much bigger role and the Federalist Society is going to have to grapple with that,” said the conservative policy activist. “There is a perception among the movement that they support administrative law judges who are really good on regulatory issues, but hand-wave at the social issues.”

Judicial Crisis Network President Carrie Severino, who has worked closely with the administration on previous judicial appointments, said “one of the things we’ve learned is you need someone with a very clear record of their judicial approach.”

“That will only increase,” she said, adding that “the vetting that goes into this choice is very intense and something the White House has been working on for a while.”

While Trump prepares to unveil his nominee in the coming days, a broad coalition of conservative groups are hurrying to create an unofficial war room for the next six weeks — and potentially longer if a confirmation vote is delayed until after Election Day — that will help guide conservative voters through a hyperpartisan fight and assist the White House and McConnell with what could be a herculean lift if other Republicans hold out. The coalition is likely to include Americans for Prosperity, Heritage Action, Judicial Crisis Network, Susan B. Anthony List, Concerned Women for America, March for Life Action and others that participated in earlier judicial confirmations.

The Republican National Committee will also deploy its rapid-response team to counter Democratic criticisms of a rushed process and charges of partisan hypocrisy against GOP senators who opposed holding a confirmation vote on Merrick Garland, the nominee President Barack Obama chose in March 2016 after Scalia’s death created a vacancy on the bench. The party apparatus will also employ the efforts of its research team to highlight the qualifications of Trump’s nominee and its digital operation to engage with voters to whom a Supreme Court confirmation battle could prove persuasive.

One Trump campaign official said the Supreme Court vacancy has the potential to boost the president’s appeal with white evangelicals and Catholics — two groups that overwhelmingly backed him in 2016, in large part because of the courts, but among whom polls have shown eroding support for Trump in the final months before the Nov. 3 election.

“Our teams will expose the naked partisanship of the Democrats’ position, and aggressively promote the qualifications of our nominee,” said Mike Reed, deputy chief of staff for communications at the RNC.